Owing to the long weekend (Oct 2-6), it was indeed a task to plan for this trip to the south. Due to the heavy rush, it was a challenge to get bookings at each of these locations, therefore I’d say this trip was planned not so much by logic, but as per availability of accommodation. Hence, we spent 2 nights at Pollachi (from here we travelled to Parambikulum), 2 nights at Valparai (travelled to Vazhachal forest too from here) and 1 night at Topslip. One of the main target for this trip was to see, photograph and video shoot the Lion-tailed macaques.

After a late night arrival at Pollachi, our trip started the next morning with a safari drive in Parambikulum TR. This was a nice and easy drive through the forest (in the FD’s bus, no private vehicles allowed) where we could stop at various places to look at the dams, the bridges, some huge and old trees and also for a quick breakfast. We did come across the usual suspects like the spotted deer, peafowls, gaurs, and a single elephant. On our way back we stopped at the Topslip forest dept office (one has to pass through Topslip to reach Parambikulum TR) to confirm our acco bookings for the day after.

The next day we packed up and left for Valparai. On our way we passed through tea estates and residential areas. As we kept looking out for sign boards towards our resort, we suddenly came across a Stripe-necked mongoose very close to a house, foraging on the garbage dump. Instantly we asked our driver to stop and we quickly jumped out with our cameras. However, before we could reach the spot, the mongoose had disappeared. A bit disappointed, we turned around towards our car and there we see our first sighting of the Lion-tailed macaques!! Thrilled to see them so close to ourselves and to the road, I started clicking and video shooting them so that I could grab as much as possible of them before they’d go into the forest. However, to my surprise, these fellows (about 5-6 individuals) kept walking around the house, foraging on the garbage dump, eating some grubs from the ground and drinking water from a tap nearby. They seemed to be so comfortable with the presence of human beings that they would even climb rooftops, walk amongst people and even cross roads. After spending about an hour with these individuals, we were quite happy for this lifer sighting and thus continued our journey to Vazhachal forest (Kerala). This forest is very different from the landscape that one would see at Valparai.

One has to exit the Tamil Nadu state check post and enter the Kerala state check post inorder to enter the Vazhachal forest. Here you’re allowed to walk on the main road. However, the entry and exit at these check posts is restricted from 6:00am to 6:00pm only. Since it was around 4pm, we’d missed much of the birds in this area and hence decided to come again the next morning for a quick round of birding. The highlight for us in this area was a pair of Malabar Giant Squirrels feeding on the large and prickly fruits of Cullenia exarillata (Bombacacae). We could see them removing each thorn carefully and throwing them away before they could feed on the soft inner parts of the fruit.

The third day we went for a birding early morning to Vazhachal forest. Amongst the various other bird calls that we heard, we managed to see a few like the Grey Junglefowl, White-bellied Treepie, Yellow-browed Bulbul. We also saw many caterpillars, a few butterflies like the Banded Catseye, Rustic, 2 skippers (to be identified) and a Common Fourring. We again saw a pair of Malabar Giant Squirrels (and heard many more individuals). After our breakfast, we decided to look for the LTMs again where we’d seen it the previous day. This time we spotted them in larger numbers, initially walking on the main road before they entered a small patch of forest. We could still see them clearly, however, due to harsh sunlight, I was unable to get any decent photo. Here is where we met 2 volunteers from the NGO Nature Conservation Foundation (NCF) who was posted in this patch simply to monitor and slow down the vehicular traffic moving through this part of the road so as to avoid any road kills and to prevent anyone from feeding these animals. These 2 volunteers did an amazing job, while carrying a board along with them which read as ‘Go slow’. 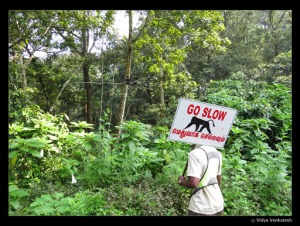 The next day was our last day at Valparai and it was time for us to checkout from here and move to Topslip for one night at the forest rest house. On our way from Valparai to Topslip, we again met the 2 volunteers who had been very helpful to us for spotting the LTMs. This time they told us that they were expecting the entire troop (of about 90+ individuals) to move and come on the road in a few minutes. Without wasting a moment, we instantly pulled our car aside and got off with our cameras once again to capture these beautiful primates. As mentioned by them, we did see the LTMs coming down one by one and walking along a small path which had less disturbance. This was the closest I’d ever been to a macaque! Though I was a bit scared as they walked past me, they seemed absolutely undisturbed by my presence amongst them. Within a few mins I was surrounded by LTMs, some females with babies, some young ones and some males who gave me a stern look as if to say ‘dare not touch my troop‘! 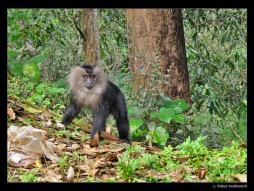 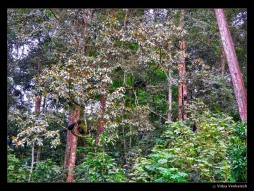 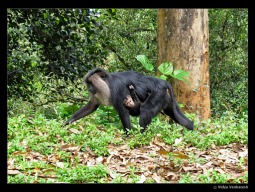 We then headed to Topslip where we stayed in the Bamboo hut rest house. We took the evening safari drive to the elephant camp inside Topslip (Anaimalais TR). Since we took the last safari to the elephant camp, we were able to witness the feeding activity at the campsite. These are all the elephants which are used for patrolling inside the tiger reserve.

The next morning, since we’d to leave for Coimbatore airport by 10am, we only had 2 hours in the morning to do the nature trail in Topslip. Not wanting to let go of this last opportunity to be inside a tiger reserve, we did a quick trail from 7.30-9.30am Though it was a short trail, we did manage to add a few species to our list of sightings on this trip. We saw a pair of Black-rumped Flameback, the Nilgiri Langur (at the campus itself), a Pygmy Woodpecker, Blue-winged Parakeets, a Cuckooshrike, a pair of Minivets and Dark Blue Tiger butterflies. We returned to the rest house and left for Coimbatore by 10am. 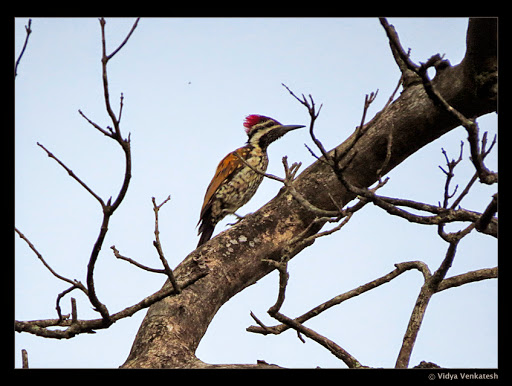 All-in-all a good recce trip to all these places.

More about the Lion-tailed macaques –

The Lion-tailed macaque (Macaca silenus) is an endemic to the Western Ghats of South. It’s is a medium-sized monkey with shiny black fur and long greyish-white hair around its face. It gets its name from its long tail, which has a tassel at the end like that of a lion. Both sexes look alike except that the males are slightly larger (approx 7 kg) than the females (approx 5 kg). The male’s tail-tuft is more developed than that of the female. Gestation is approximately six months. The young are nursed for one year. Sexual maturity is reached at four years for females, and six years for males. The life expectancy in the wild is approximately 20 years, while in captivity is up to 30 years. A recent assessment for IUCN reports 3000-3500 of these animals live scattered over several areas in Kerala. The LTM ranks among the rarest and most threatened primates. Their range has become increasingly isolated and fragmented by the spread of agriculture and tea, coffee, teak and cinchona, construction of water reservoirs for irrigation and power generation, and human settlements to support such activities.

Our book of the forest